Let’s start with the endocrine system. Which, most likely you never think about. In fact, probably even know about. The endocrine system is a network of glands and organs that produce, store, and secrete hormones. Hormones are the chemical messengers that swim throughout our bloodstreams signaling every cell and organ what they are supposed to do to keep our bodies working the way they are supposed to. It’s not just that hormones are key to keeping us healthy. We simply couldn’t live without them. When something interferes with or disrupts how they function, we’re beyond out of luck. We don’t want to trash talk hormone disrupters, but well…they deserve it. So here’s the story…

Chemicals are an essential component of our daily lives. We know chemicals aren’t so great. But some chemicals, known as endocrine disruptors, can have harmful effects on the body’s endocrine (hormone) system. Chemicals that interfere with hormone actions—even at low doses– can knock your whole system out of balance. Endocrine disrupter chemicals (EDC’s), or hormone disrupters as they are more commonly referred to, have been around for a long time.  Over the last 70 years, more than 80,000 chemicals have been released into the environment through human activity. Yes, you’ve got the zeros right. Because of inadequate health and safety laws, more than 85% of these chemicals have never been assessed for possible effects on human health. But many have, which we’ll get to in a minute.

HORMONE DISRUPTERS; THEY’RE EVERYWHERE AND THEY LIKE IT THERE

They’re lurking where we can least suspect it. We’re being exposed to them in countless ways, and most of the time, we don’t even know it. They’re in our food (that supposedly good-for-you fish you ate), personal care products (that shampoo promising to leave your hair healthy and shining), cosmetics (not so beautiful), pharmaceuticals, pesticides (well, we all know those are baddies), soil, water and probably no surprise, plastics. To put it into perspective, global production of plastics grew from 50 million tons in the mid-1970s, to over 300 million tons today. They’ve got names you have trouble even pronouncing; BPAs, dioxin, atrazine, phlatates, perchlorates, fire retardants (PBDEs), lead, arsenic, mercury, perfluorinated chemicals (PFCs), organophosphate pesticides, glycol ethers…

And the worst, is that hormone disrupters are very stable. In other words, they don’t break down quickly. They often hang around doing their dastardly hormone-imbalancing deeds for years. Scientists from around the globe have found that endocrine-related diseases and disorders are on the rise. A United Nations Panel formed to look into them, has called hormone disrupters a “global threat”.

EVEN POLAR BEARS SHOULD BEWARE

Just to put their far-reaching effects into perspective, decades-old chemicals may be threatening polar bear fertility. As if between climate change, human conflict and habitat loss they didn’t have enough to worry about. It turns out these vulnerable conservation icons also face a more unlikely threat: industrial chemicals that were banned almost 40 years ago. PBC’s (more about them below) reach them in long-range transport by air and ocean currents.

Polar Bears have hormones, too.

Choose phthalate-free packaging, drink filtered tap water, dust and vacuum often, turn your nose up at fragrances, think twice about plastics, kick cans to the curb, be on constant pesticide alert…couldn’t hurt, except who can really live that way?  But here’ what you need to know. If the damage has been done and your hormones have been constantly hit and hurled out of balance, giving up sushi and that expensive bottled water –even if it has vitamins and electrolytes, isn’t going to cut it. But take heart, there’s help. It’s very difficult to measure many of these chemicals in humans, and there aren’t biochemical tests (like you could really take them) for most of them. What you can test, is if your hormones are in a healthy balance. And to check them, you want the most expert and experienced hormone pros you can find; Denver Hormone Health. The medical professionals at DHH, can pinpoint where your hormone levels aren’t where they’re supposed to be, and with personalized care can get them back on track. And you feeling the best you can be. All percolates aside. Call Denver Hormone Health for an appointment now.

Hormones are the chemical messengers that swim throughout our bloodstreams signaling every cell and organ what they are supposed to do to keep our bodies working the way they are supposed to. It’s not just that hormones are key to keeping us healthy. We simply couldn’t live without them. When something interferes with or disrupts how they function, we’re beyond out of luck. Endocrine disruptors (EDs) or hormone disruptors, are our bodies worst nightmares. These disruptors can cause cancerous tumors, birth defects, and other developmental disorders. Any system in the body controlled by hormones can be derailed by hormone disruptors.

There is no end to the tricks that endocrine disruptors can play on our bodies:

Can’t you simply avoid these man-made monsters?  Regrettably, no. They’re everywhere. They’re in our food (that supposedly healthy fish you ate), personal care products (that shampoo promising to leave your hair healthy and shining), cosmetics (not so beautiful), pharmaceuticals, pesticides (well, we all know those are baddies), plastics (that healthy H20 you pay more than a buck a bottle for), soil and even water. Worst of all; they can hang around for years.

EVEN THEIR NAMES SOUND NASTY

Here are the worst of the worst:

THEY DO A BODY REALLY BAD

Specifically, endocrine disruptors like these may be associated with:

GET THE LEAD OUT

Yikes! Isn’t there something you can do? To a point:

Oh yeah, sure, real easy to follow some of the above suggestions. Like maybe near impossible? Besides, no matter what you do, it’s really not going to do the trick. What you can do, is stay on top of your hormone health. And the best and smartest way to do that, is to see the hormone experts at Denver Hormone Health. Keeping your hormones from hurting you, is a delicate balance. At Denver Hormone Health, they know everything there is about hormones and keeping them in balance to keep your life in balance. Because of their experience, they are more apt to recognize hormone imbalance symptoms you may be experiencing than your family doctor. They approach your overall health with a more trained eye. They start with a detailed evaluation. Then simple tests tell them exactly where your hormone levels stand.  This allows them to create a unique, individualized and comprehensive plan to get your hormones functioning at their optimal best. Which will allow you to feel your absolute best. Hormone disrupters aren’t going anywhere. If anything, they are increasing and becoming more invasive. Which means you need to be more aggressive in keeping their affects at bay. Call Denver Hormone Health for an appointment now. And don’t let anything disrupt you from doing it. 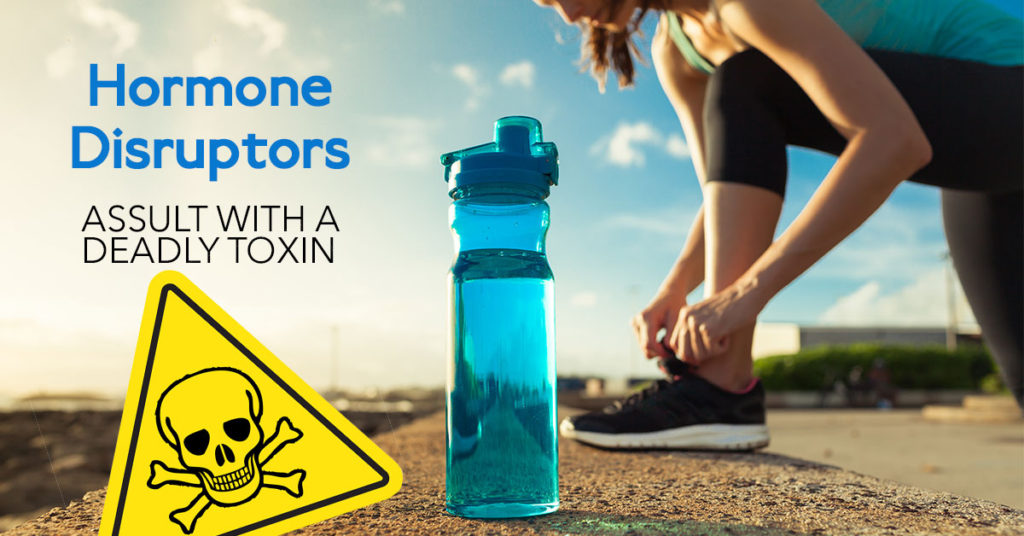 COME OUT, COME OUT, WHEREVER YOU ARE

In case you weren’t sure, your endocrine system is constantly churning out hormones that control everything from your heart rate, to your metabolism, mood, sex drive, appetite, and more. Think of hormones as the body’s chemical messengers which allow your organs to communicate with one another and keep your system humming. But much of the time, bumming is more like it. We’re incessantly and cruelly bombarded with hormone disruptors, whose entire mission in life is to make us miserable. Laughingly mimicking our real hormones, tricking the body into thinking they’re the real thing. Oh, and the tricks they love to play…nasty. Like promoting premature cell death. (Couldn’t you just die?)

That water bottle you just drank from? Yup.

The carpet you just sat on? Ditto.

The shampoo you just used? Without question.

The fish you just ate? They love it.

These insidious interlopers aren’t just ruthlessly hazardous, even their names don’t exactly roll off the tongue. Get out your fingers and a couple toes, and let’s start counting:

Disruptors aren’t just insidious and unpredictable, they are carcinogenic. And the results, aren’t pretty. Hope you’re sitting down, because here are just a few staggeringly treacherous things they are linked to:

CLEAN UP YOUR ACT

Take a long, deep calming breath. There are some relatively simple things you can do to put some brakes on the damage:

If you really want to put on the gloves and defend your body’s health, you should think about correcting the hormone imbalances disruptors cause. Fortunately, there is someone on your side in the Denver area: Denver Hormone Health. With a few simple tests, (that simple, no kidding), one of their experienced doctors in the field can get a clear read on what’s going on with your hormones. That allows them to create a unique treatment plan (no one-size-fits-all solutions here), to help get your hormones back in balance and put your life back on track.

Denver Hormone Health knows how to fight the good fight. And they’re here to do it for you.