MALE MENOPAUSE … WOULD IT HELP TO CALL IT ANDROPAUSE?
“IT DOESN’T MATTER WHAT YOU CALL IT. I DON’T WANT IT.”

Every man wants to live life to the fullest, but life’s “halfway stage” can see a significant number of them entering a phase called male menopause. Male menopause has been called many things, and if we’re going to get real about it, an abundance of words that are limited to 4 letters. But male menopause is really just the more common name for “andropause”. Still doesn’t sound great, right? “Andras” in Greek means human male and “pause” in Greek a cessation. So literally “andropause” is defined as a syndrome associated with a decrease in sexual satisfaction or a decline in a feeling of general well-being with low levels of testosterone in men as they age.

Well, somewhat. Andropause differs from female menopause in several ways. For one thing, not all men experience it. For another, it doesn’t involve a complete shutdown of your reproductive organs. In women, ovulation ends and hormone production plummets during a relatively short period of time. This is known as female menopause: the “change” which some men would refer to as “mentalpause”. Andropause can cause men to go through their own “change”, but the consequences aren’t as clear.

IT’S ABOUT MORE THAN JUST SEX AND YOUR MAN PARTS
“REALLY? COULD IT BE ANY WORSE THAN THAT?”

Testosterone, which is produced in the testes, is usually thought of as the powerhouse hormone that makes men, men. According to the Mayo Clinic, most men’s testosterone levels peak in adolescence and early adulthood. In their 30’s or 40’s (and sometimes even younger), those levels tend to decline by about 1 percent per year. By age 70, your testosterone level might reach closer to 50 percent of your peak level. Regrettably, this process can cause a lilt in your libido and the ability to “lift-off” when it comes to sex. So yes, it’s about sex. But more important to know, is that it’s more.

OK, we’ll get right to it. The sexual side effects of andropause include:

THEN THERE’S YOUR PSYCHE. (OH, AND THE REST OF YOUR BODY)
“ENOUGH ALREADY. YOU’RE KILLING ME…”

We’ll assure you again; you should just be informed.

In some cases, depression may be the first symptom of andropause that you notice. Feelings of unexplained sadness or anxiety. In fact, some men go to psychiatrists first, when it might be that they need to get their hormone levels checked first. Low testosterone can also cause:

And here’s a flash; hot flashes and night sweats

That part’s easy; Denver Hormone Health. The hormone professionals at DHH know hormones inside and out. Every hormone. Including testosterone. They have years of experience treating men as they wander unknowingly through the maze of male menopause. It can be somewhat uncomfortable to some men to talk to their doctors about the sex stuff. But the experts at DHH will put you right at ease. They listen. Ask questions. Encourage you to ask questions about anything and everything. Then they test your testosterone levels to pinpoint what’s going on. Are you really going through andropause, or could it be some other medical issue? If it is andropause, they create a treatment plan to balance your testosterone with safe, natural bioidentical hormones. Which they’ll also discuss in every detail. Put the balance back in your life. Call Denver Hormone Health for an appointment now. 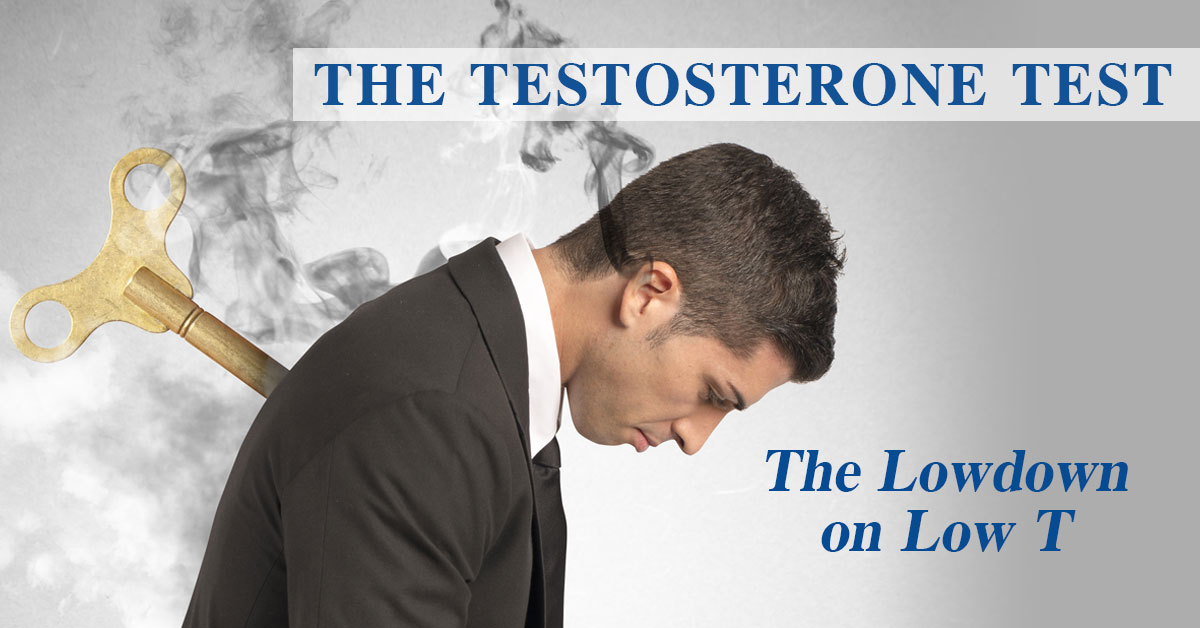 Get your tablets out: True or False:

Answers: False. True. False. False. (but go ahead and think it if you love oysters)

After the age of 20, it’s thought that growth hormone levels in men drop around 14% every 10 years. That means by the time a man is 40 years old he’s lost about half of his 20-year-old growth hormones, and at 80 only 5% of the growth hormones remain. Unlike Peter Pan, you will grow up and with it, down go the hormones. Which is where the new guy on the hormone block comes in. This decrease in testosterone is often referred to as andropause, or male menopause. In the U.S. alone, andropause is thought to affect about 10 million men. “Andropause”? Who thought that one up? Is it the same as low T? Nope. They are not synonymous. Andropause is the gradual (note “gradual”, and stop sweating for a minute) decline of natural testosterone production and levels over time, something that does not occur in all men, and when it does, happens at different stages in their lives in different levels.  Andropause (which a lot of medical people question existing at all), is something that is (generally) independent of your starting testosterone level. Low testosterone (or low T) is a condition that must be clinically diagnosed, and this can happen at any age and be caused by a variety of different diseases or disorders. Andropause is not necessarily caused by low T, but people can get confused when it comes to some of the overlapping symptoms:

Pause to Find the Real Answers

Low t can be troubling to any man. And just the thought of male menopause and what you consider to be the embarrassment of it can make you want to keep the problem to yourself. It’s not easy to talk about. But without question, the symptoms are not easy to live with. But there is an answer that is easy to live with, and his name is Stephen A. Goldstein M.D., F.A.C.S. at Denver Hormone Health. With years of experience and expertise in the area of testosterone and the issues surrounding it, he knows how to diagnose and treat any problems you might have with care and integrity. You might not even realize what’s really going on, but with simple tests, Dr. Goldstein can. And from there, he creates a treatment plan that’s tailored to you to make you feel your best.

In all ways, it’s the answer you’re looking for.