You are here: Home1 / Blog2 / perimenopause 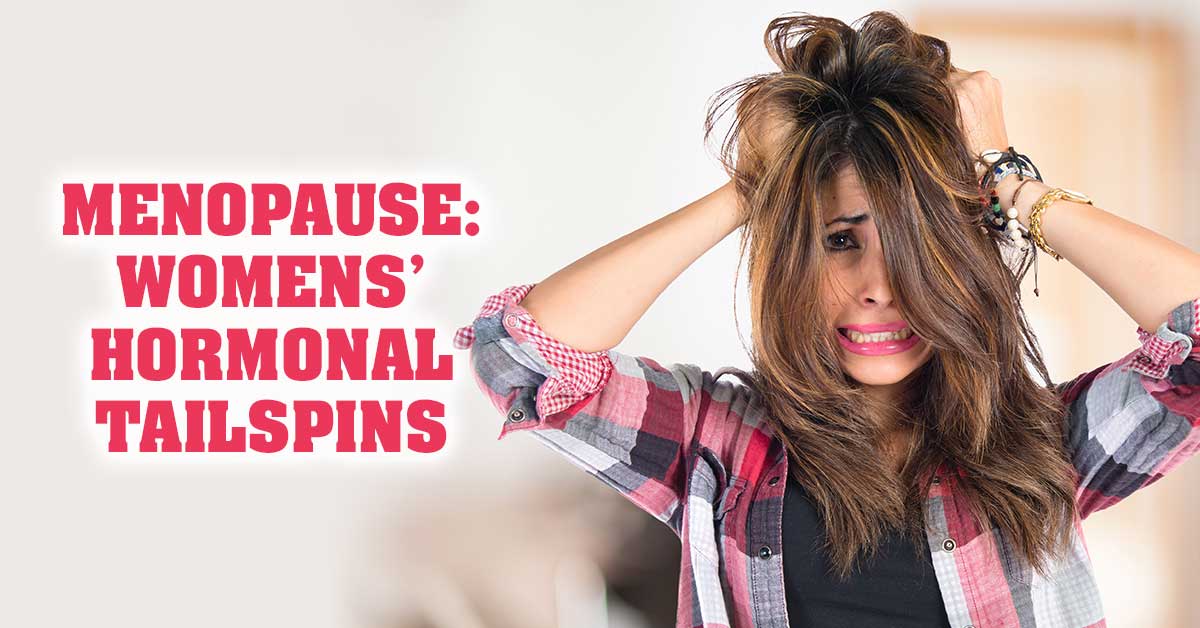 What Hormones Have To Do With Menopause

Menopause? To put it simply, hormones (of which the human body has 50 or so which control every organ in your body) are chemical messengers that circulate throughout your bloodstream telling your cells what they are supposed to do. However, they don’t always do the job. Which can have a major effect on how you feel.

This Ought To Give You Pause

You’ve heard of (or are ridiculously ensnared in) Menopause. But many women aren’t really aware of what’s referred to as Peri-menopause. Menopause is defined as a: “lack of period for 12 months or more, in a woman who is over age 40.”  Peri-menopause entails the years leading up to menopause—a time of hormonal imbalance, when the production of sex hormones (estrogen, progesterone and testosterone) begin to decline.

Sweating Bullets Is A Real Killer

Peri-menopause varies greatly from one woman to the next. The average duration is three to four years, although it can last just a few months or extend as long as a decade. While most women associate the dreaded hot flashes with menopause, they are the most common symptom of peri-menopause. Hot flashes that make you feel like you’re being consumed internally by fire. Hot flashes that send you running to open the freezer door and stand there with your head in it trying to get some relief. Then there are the nasty night sweats that leave you wiped out, (and the sheets) wringing wet.

Many women trudging through peri-menopause and menopause suffer from other symptoms. These include the potential of fibroids (benign tumors of the uterine wall) and endometriosis. About 40% of perimenopausal women have sleep problems. Estimates put the number of women who experience mood symptoms during peri-menopause at 10%–20%. The vagina may become dry and thin, and sex may be painful. It could also lead to the “blahs”, extra weight, chronic low energy and even osteoporosis.

Nothing Funny About It

Menopause jokes abound, but ask any woman woefully wading through it and they’ll tell you it’s no laughing matter. Hearing “chill out” in response to a hot flash, is never amusing. But you want to know what some people think is hilarious? Try a book called “How not to kill the woman you love: your guide to surviving her menopause”. And here’s a supposed hoot: The 7 Dwarfs of Menopause: Itchy, Bitchy, Sweaty, Sleepy, Bloated, Forgetful and Psycho. Is it any wonder women would like to be reincarnated as something that doesn’t go through menopause?

The Road Doesn’t Have To Be Rocky

Fortunately, it does NOT have to be a time when a woman feels like her body is fighting against her. There is a way to stop hormones from ruling you. The answer is Denver Hormone Health. Every one of their doctors has had extensive experience and training in balancing the hormones that wreak havoc on a woman during peri-menopause and menopause. (Actually, they are unmatched in correcting every type of hormone imbalance in the body). No other team meets their level of understanding, dedicated care and standards. Through state-of-the-art diagnostic testing they are able to create individualized treatment plans that will help you achieve optimal health. Call Denver Hormone Health for an appointment now.  There’s no better way to change “the change.