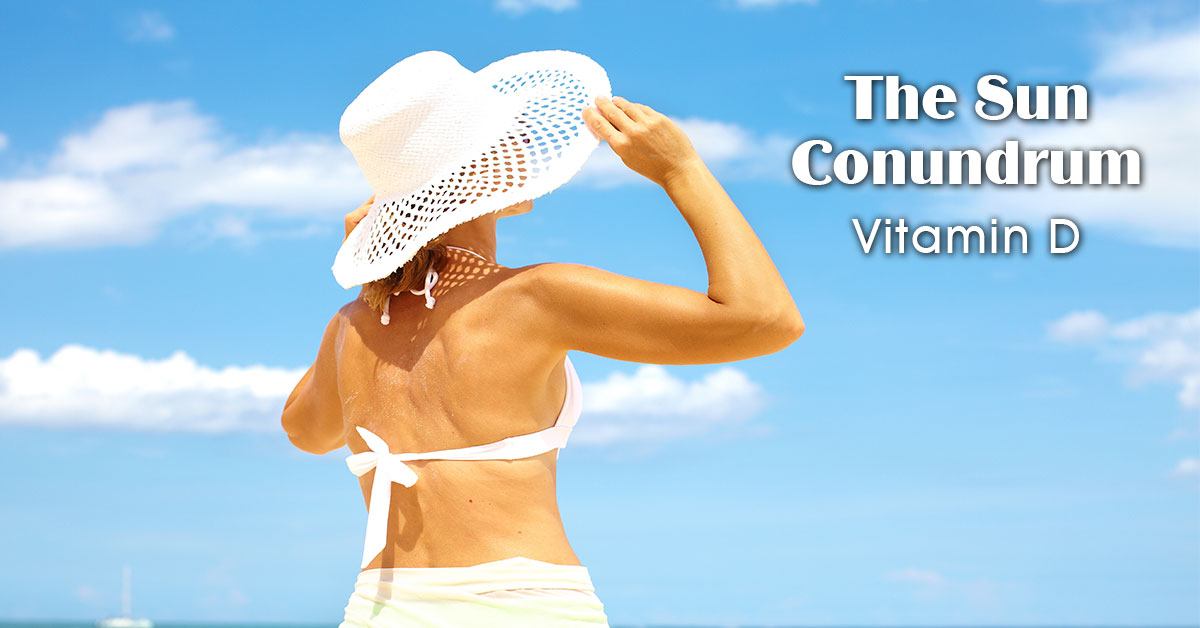 Vitamin D is often referred to as the Sunshine Vitamin. Oh, remember the days of baking for hours wearing nothing but baby oil and iodine and holding sun visors up to your face to really turn up the tan? Or in most cases, burn. Who ever lusted after “tall, light and handsome?” And who ever asked for the blotchy sun spots and skin damage you now run to dermatologists for? Well, the thing that’s great about a minimal sun soaking today, is that it’s free.; your body makes it when sunshine touches your skin. It is believed that the lack of Vitamin D is the result of minimal exposure to the sun, caused by among other things, the over-use of sunscreens. Boosting and maintaining healthy levels of vitamin D is as simple as spending between five minutes and half an hour in the afternoon sun a couple of times per week. Coming out of our winter hibernation and seeing some long-awaited sunshine is enough by itself to make us feel better and boost our moods. But this is when we are able to top off our vitamin D stores that have been depleted over the winter. But even in warm weather, there is a growing trend to get too little of the sun’s rays because of our lifestyles. We sit in offices all day. Or at our desks at home. The healing rays of natural sunlight can’t penetrate glass. So sitting in your air-conditioned car won’t cut it. Advertising has made us sun-phobic. For the last 30 years or so, doctors (dermatologists in particular), health officials, beauty experts and many product companies have been demonizing the sun. They’ve told us to avoid it because without sunscreen, exposure to the sun’s rays will damage skin and cause cancer. So today, when we do go out, we slather on high enough SPFs to cocoon us from any helpful rays. If 15 used to be good, now 100 SPF’s line pharmacy aisles.

It is nearly impossible to get adequate amounts of vitamin D from your diet. Sun exposure is a much bigger magic bullet. For example, a person would have to drink ten tall glasses of vitamin D fortified milk each day just to get minimum levels of D into their diet. (Hello, bloat) “Fortified” is the key word when it comes to getting any D from what you eat. But you do have choices; more than ever before, and some pretty interesting ones:

For all this, the rule still follows that none of these foods will supply you with enough Vitamin D for optimal health.

If you can remember, Wonder Bread’s slogan was “Helps Build Strong Bodies in 12 ways.” They added vitamins and minerals, but it was never for

D Doesn’t Have to be Such a Dilemma

If you happened to read about Vitamin D somewhere, (and who does that?) your head would be spinning. Vitamin D is a vitamin, right? So now you’re telling me it’s a hormone. And like all hormones, they send chemical messages throughout your bloodstream to cells just waiting for them to tell them what to do. If they don’t get the message, there’s a lot of problems that can get you.  It’s a lot to take in. You just figured get in the sun more, take more supplements, even hit a tanning bed. Simplistic, and just not effective. D deficiency can be dangerous. Too little or too much of any hormone can lead to a hormone imbalance and a list of illnesses that can take you down and out.

Dr. Stephen A. Goldstein MD, F.A.C.S. at Denver Hormone Health is renowned in the field of hormone replacement. He’ll ask you a lot a questions, and give you a lot of answers. Simple tests will tell him what D is doing to your body and your health. Which makes it easy for him to create a unique treatment plan. Yes, it’s a lot to know, but know and feel confident that Dr. Goldstein is the go-to hormone replacement specialist, to feeling the best you can be. Call for an appointment now. The first thing you’ll learn is that you’ve come to the right place. 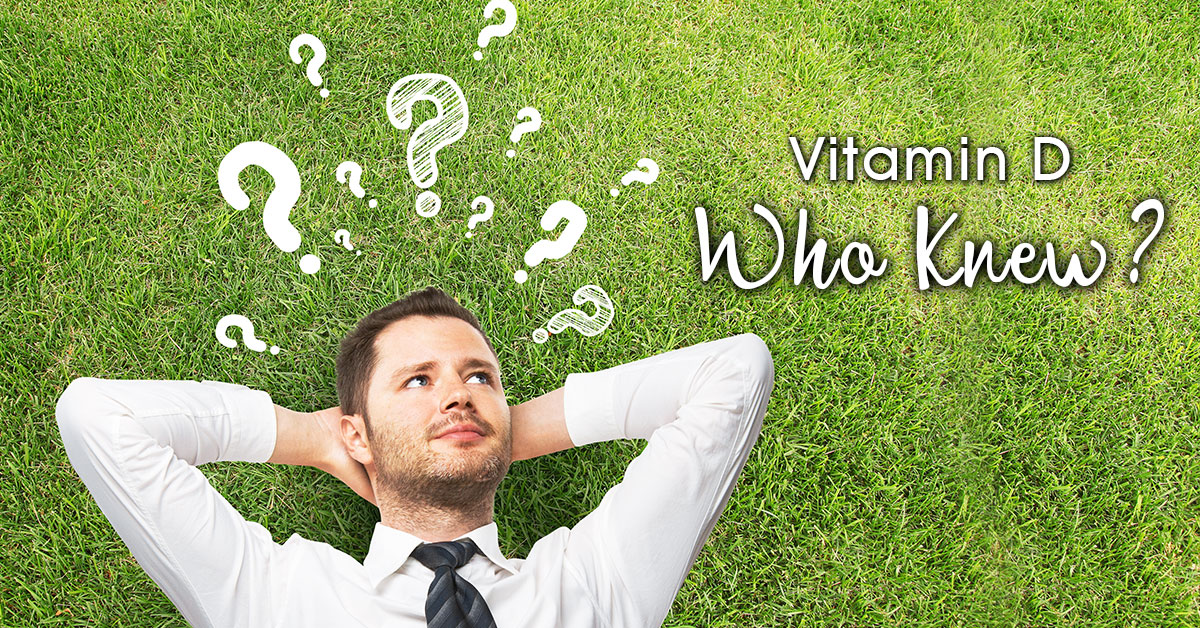 Vitamin D deficiency doesn’t always cause symptoms. You could be low, and not know. When you do have a deficiency, the symptoms may include:

Sick Just Thinking About it

Talk about a big headache. (Which isn’t even on the list.)

A Killer to Cancer

Finally, some good news. No, some potentially great news. In the past few years, numerous studies have shown that optimizing your Vitamin D levels may actually reduce the risk, and increase survival rates of as many as 16 different types of cancer including pancreatic, bladder, colorectal, lung, breast, ovarian, prostate and colon. Imagine the hope in this hormone. Tell me more. Can D really help me?

You’re not feeling too good, but you figure it’s nothing, so you do nothing about it. Until you feel a little worse. Until you’re faced with some real problems that you’d really like some solutions to. You are clueless as to where to go. Is there a specialist? Will they think you’re being overly concerned and even dreaming things up? You think, “could it be this? Could it be that? “Most of the time you never even come close to determining what your real problems are. This isn’t a matter of hit or miss. It’s a matter of careful evaluation and testing by someone who is an expert in the field of hormone replacement. You may balk, but then you may not know that Vitamin D is a hormone. Diagnosing Vitamin D deficiency is tricky, and the only way to get results is to get tested. Your absolute best choice for doing this is Dr. Stephen A. Goldstein MD, F.A.C.S. at Denver Hormone Health. He knows the tests to take, and has years of expertise in understanding the results and how they affect your health. Based upon the results, he’ll create a completely tailored treatment plan that takes everything D can do into consideration.

If you want to feel your best, don’t just consider calling for an appointment. Contact us right now.

Vitamin D deficiency remains the most common nutritional deficiency worldwide, affecting nearly 1 billion people. It’s epidemic. A global problem in all age groups, male and female. Generally, it’s found most where there is limited sun exposure. Which makes it surprising that even countries with plenty of sun have a high number of people with Vitamin D deficiency. For example, Vitamin D deficiency soars in sunny Australia, one of the sunniest places on earth. In the Caribbean, there’s no shortage of sunshine, but again, there’s a huge Vitamin D deficiency. The same goes for sunny states in the US, like Arizona, California and Hawaii. As awareness of the magnitude of the problem, studies are being conducted from all over Europe, The Middle East, China, Pakistan, Iran, Egypt, India, Iceland, Asia, Africa, Latin America, and, of course, North America.

The Numbers Could Knock You Over

Of the nearly 1 billion people worldwide with likely vitamin D deficiency, it is estimated that up to 85% of those people are unaware of their deficient state. And if you think that’s amazing, consider this:

Just to break it down, here’s a look at how vitamin D effects different types of people.

The number of children with vitamin D deficiency has increased 200% in the last five years. Studies have shown that it places them at an increased risk for allergies, eczema, autism, irritable bowel syndrome, nearsighted vision, growing pains, infections and even cavities.

The most significant problem here, is with women who are pregnant. If a woman is Vitamin d deficient, there can cause some serious problems:

Here’s a wake up; vitamin D deficiency is tied to low testosterone, even in healthy men. Probably the first thing you think about is sex. Being traumatized by a low libido.(“no-no-no-no-no”) But here’s the real story about testosterone. In addition to affecting sexual function, testosterone is a steroid hormone that is essential to overall health and athletic performance. Testosterone builds muscle, improves strength and increases the body’s capacity to use oxygen during exercise. A lack of it can make you feel sluggish, chronically sick and slightly depressed. It can even make you run slower. Lately, scientists have started to recognize that even healthy, young athletes can be affected by vitamin D deficiencies, and they’re looking into the role that this vitamin might play in performance and injury. Sick athletes are not happy athletes, which makes low d a big quandary.

Who Do You Trust for Answers?

Vitamin D is responsible for keeping your whole body running smoothly. It helps you fight disease. I can keep you from getting really sick. Few doctors are qualified in pinpointing what D is or isn’t doing to keep you from feeling your ultimate best. It’s not something they’re schooled in. Many never even bring the topic up, few know to test you for it. So they remain as much in the dark about why you’re feeling so unwell as you do. Hormone Replacement Therapy is a specialized field that requires someone incredibly trained in treating Vitamin D deficiency. That would be Dr. Stephen A. Goldstein MD, F.A.C.S. at Denver Hormone Health. He knows the questions to ask. The symptoms to look for. And with simple tests, can see just where your D stands. From there, he creates a uniquely tailored treatment plan that treats what’s going on with you. “Drink more milk” isn’t an answer. Calling for an appointment is.