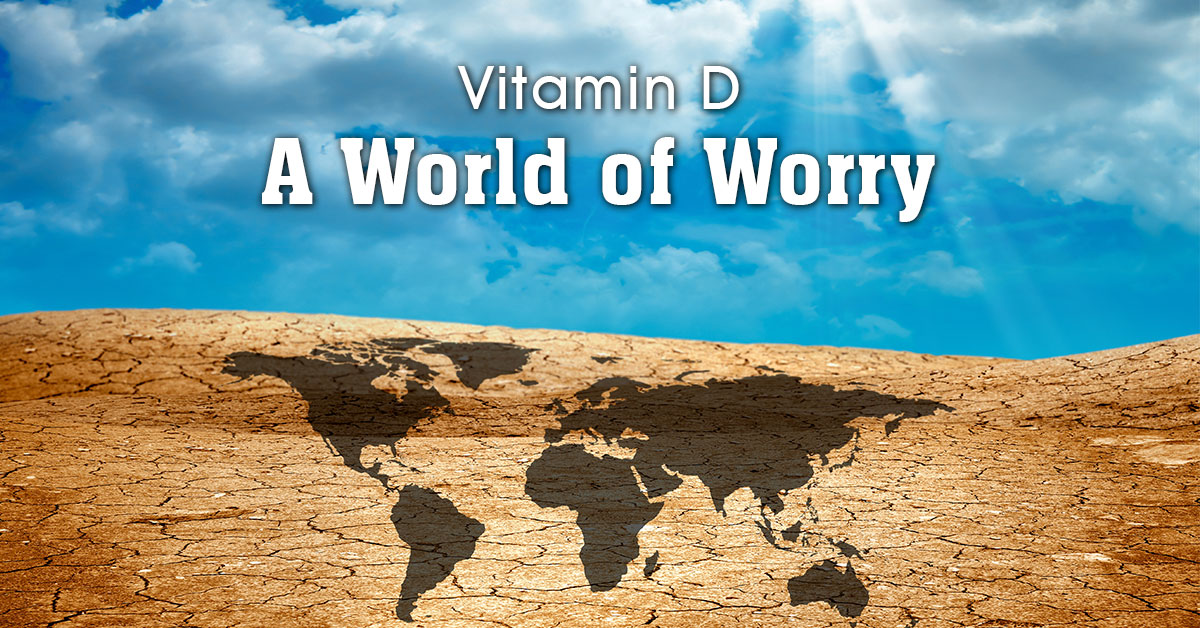 Vitamin D deficiency remains the most common nutritional deficiency worldwide, affecting nearly 1 billion people. It’s epidemic. A global problem in all age groups, male and female. Generally, it’s found most where there is limited sun exposure. Which makes it surprising that even countries with plenty of sun have a high number of people with Vitamin D deficiency. For example, Vitamin D deficiency soars in sunny Australia, one of the sunniest places on earth. In the Caribbean, there’s no shortage of sunshine, but again, there’s a huge Vitamin D deficiency. The same goes for sunny states in the US, like Arizona, California and Hawaii. As awareness of the magnitude of the problem, studies are being conducted from all over Europe, The Middle East, China, Pakistan, Iran, Egypt, India, Iceland, Asia, Africa, Latin America, and, of course, North America.

The Numbers Could Knock You Over

Of the nearly 1 billion people worldwide with likely vitamin D deficiency, it is estimated that up to 85% of those people are unaware of their deficient state. And if you think that’s amazing, consider this:

Just to break it down, here’s a look at how vitamin D effects different types of people.

The number of children with vitamin D deficiency has increased 200% in the last five years. Studies have shown that it places them at an increased risk for allergies, eczema, autism, irritable bowel syndrome, nearsighted vision, growing pains, infections and even cavities.

The most significant problem here, is with women who are pregnant. If a woman is Vitamin d deficient, there can cause some serious problems:

Here’s a wake up; vitamin D deficiency is tied to low testosterone, even in healthy men. Probably the first thing you think about is sex. Being traumatized by a low libido.(“no-no-no-no-no”) But here’s the real story about testosterone. In addition to affecting sexual function, testosterone is a steroid hormone that is essential to overall health and athletic performance. Testosterone builds muscle, improves strength and increases the body’s capacity to use oxygen during exercise. A lack of it can make you feel sluggish, chronically sick and slightly depressed. It can even make you run slower. Lately, scientists have started to recognize that even healthy, young athletes can be affected by vitamin D deficiencies, and they’re looking into the role that this vitamin might play in performance and injury. Sick athletes are not happy athletes, which makes low d a big quandary.

Who Do You Trust for Answers?

Vitamin D is responsible for keeping your whole body running smoothly. It helps you fight disease. I can keep you from getting really sick. Few doctors are qualified in pinpointing what D is or isn’t doing to keep you from feeling your ultimate best. It’s not something they’re schooled in. Many never even bring the topic up, few know to test you for it. So they remain as much in the dark about why you’re feeling so unwell as you do. Hormone Replacement Therapy is a specialized field that requires someone incredibly trained in treating Vitamin D deficiency. That would be Dr. Stephen A. Goldstein MD, F.A.C.S. at Denver Hormone Health. He knows the questions to ask. The symptoms to look for. And with simple tests, can see just where your D stands. From there, he creates a uniquely tailored treatment plan that treats what’s going on with you. “Drink more milk” isn’t an answer. Calling for an appointment is.

VITAMIN D – Who Knew
HORMONE D…WELL THAT SOUNDS WEIRD
THE SIDE EFFECTS OF LIFE – The Sunshine Vitamin
US AND THE KOMODO DRAGONS
VITAMIN D – Hit or Myth
WHO KNEW?
VITAMIN D – The Sun Conundrum
SHOCKING!