Blog
You are here: Home1 / Blog2 / Healthy Recipes3 / QUINOA ALL ABOUT IT – CUCKOO FOR SUPERFOODS 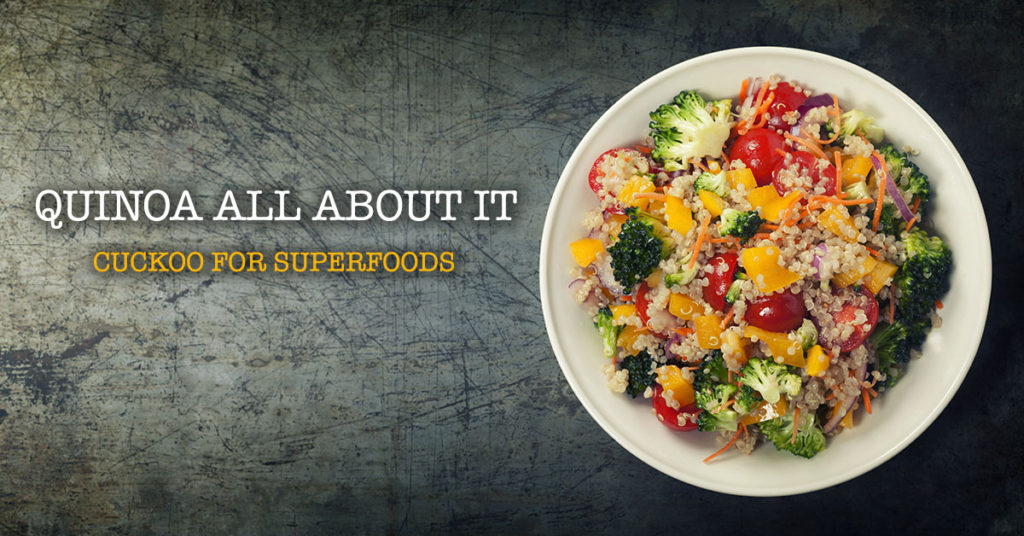 So what is a “superfood”, anyway?

The Macmillan Dictionary defines it as a food that is considered to be very good for your health, and may even help some medical conditions. The Oxford Dictionary definition states it’s a nutrient-rich food considered to be especially beneficial for health and well-being. A simple search for the word, reveals close to 10 million results—predominantly from health and nutrition blogs, online newspapers and magazines, and providers of so-called nutritional supplements. The term “superfood” was coined by the authors of a book called Superfood in 1990. If you really want to be a stickler about it, the concept of superfood goes all the way back to the 1950s when the world’s first superfood—spinach—was made famous by cartoon character Popeye the Sailor Man (this is a major fun, eye-popping Google) who inhaled tons of the green stuff for strength. Actually, there really is no legal or medical definition of superfood. But the term “superfood” has become a popular buzzword, today’s silver bullet for head to toe health—inside and out. It seems like a new superfood pops up every single day. Recent research found that 61 per cent of people have bought a food or drink because it had been labelled as a superfood. “Bought” being the operative word here. But more on that later.

The term “superfood” is not regulated by the Food and Drug Administration. Still, the world is in a current frenzy over superfoods. But in a world of growing health paranoia, many think superfoods are a gimmick, a murky, magical panacea created by dollar-hungry and extremely clever marketing mavens who use the same aggressive techniques to sell superfoods that it used a few years ago to convince us we would all have perfect bikini bodies if we ate little more than Snack Wells.  Promoted by the right people, superfoods fly off store shelves.

And the public is eating it up (pun intended).

Organic, good—non-organic bad. That’s what it’s come down to for the health-crazed looking to live forever. There is some truth to the organic “good” part of the equation (other than the shell shock at the cash register). Organic food refers to the way agricultural products are grown and processed. Organic crops must be grown without the use of synthetic pesticides, bioengineered genes (GMOs), petroleum-based fertilizers, and sewage sludge-based fertilizers. Organic livestock raised for meat, eggs, and dairy products must have access to the outdoors and be given organic feed. They may not be given antibiotics, growth hormones, or any animal-by-products. In addition, organic farming practices are designed to encourage soil and water conservation and reduce pollution. It’s important to know that “natural” and “organic” are not interchangeable terms. You may see “natural” and other terms such as “all natural,” “free-range” or “hormone-free” on food labels. These descriptions should be truthful, but don’t confuse them with the term “organic.” Only foods that are grown and processed according to USDA organic standards can be labeled organic.

You don’t have to buy organic items of every food item to make a difference in your health. But below are foods to buy organic because they are highly sprayed with pesticides:

“Yikes! But I eat these all the time! I’m pesticide riddled…”

In 2016, the Environmental Working Group released an updated version of their report “Shopper’s Guide to Pesticides in Produce” in which they reported on pesticide residues found on 48 popular fresh fruits and vegetables. Their report was based upon an analysis of 32,000 samples tested by USDA and FDA scientists. The following are the 15 fruits and vegetables that they found least likely to have concentrated pesticide residues. They call this list the “Clean 15”:

The thing to remember is that you don’t have to eat organic 24/7. Organic foods could give some people brain freezes when they see the prices. Relax. If you can’t afford to go organic just make sure you buy a variety of non-organic fruits and veggies, and wash them well. If there’s a Farmer’s Market near you, grab your biodegradable bag and go for it.

YOU CAN TALK ABOUT THE MIRACLE POWER OF SUPERFOODS, BUT THERE IS REALLY NO EVIDENCE OR SUBSTANTIAL STUDIES THAT CAN PROVE THAT. IT’S A HIT OR MISS PLAN FOR OVERALL HEALTH. AND IT DOESN’T HELP BALANCE YOUR HORMONES.

WHEN YOUR HORMONES ARE OUT OF BALANCE, YOU CAN BE PLAGUED BY A HOST OF PROBLEMS AND MEDICAL ISSUES. SINCE HORMONES ARE THE BODY’S MESSENGERS CONTROLLING HOW YOUR CELLS AND ORGANS DO THEIR WORK, UNBALANCED HORMONES LEAVE YOUR BODY OUT OF CONTROL. A SUPER SMART SOLUTION TO GETTING YOUR HORMONES IN BALANCE IS TO SEE DR. STEPHEN A. GOLDSTEIN M.D., F.A.C.S. AT DENVER HORMONE HEALTH. WITH SIMPLE TESTS, HE CAN MEDICALLY DETERMINE WHAT YOU NEED TO FEEL YOUR BEST. DEPENDING ON THAT, HE CREATES A UNIQUELY TAILORED HORMONE REPLACEMENT PLAN TO HELP WHERE YOU NEED HELP. READY TO GET ON WITH A SUPER LIFE? CALL NOW FOR AN APPOINTMENT.